What are "analysts"? Problem Solvers or Prophets? Long-term-researchers? Consultants? All of the above? All the time?

I think industry analysts generally think of themselves as modern secular prophets, providing a combination of forecasting and evangelism. According to Wikipedia, "prophets are regarded as having a role in society that promotes change due to their messages and actions". The Hebrew word for Prophet literally means Spokesperson - in other words, the prophet is an intermediary.

As Wikipedia explains, there may be issues with the authenticity of a prophet: it is suggested that some prophets may have been schizophrenic. For a modern technology analyst, the authenticity of the prophecy may be compromised to the extent that the analyst turns out to be merely a spokesman.

Bob Dylan wrote a song about prophecy, which could also be interpreted as a song about software industry analysis.

There's too much confusion, I can't get no relief.
None of them along the line, Know what any of it is worth.
There are many here among us, Who feel that SOA is just a joke.
Let us not talk falsely now, The hour is getting late. 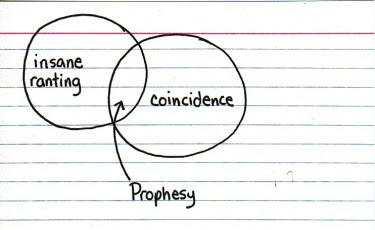 Posted by Richard Veryard at 5:11 pm