From Networked BI to Collaborative BI

Back in September 2005, I commented on some material by MicroStrategy identifying Five Types of Business Intelligence. I arranged these five types into a 2x2 matrix, and commented on the fact that the top right quadrant was then empty. 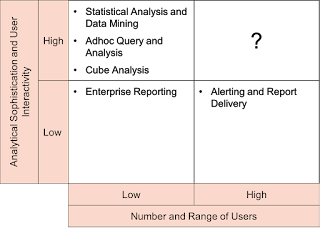 The Cloud BI and analytics vendor Birst has now produced a similar matrix to explain what it is calling Networked BI, placing it in the top right quadrant. Gartner has been talking about Mode 1 (conventional) and Mode 2 (self-service) approaches to BI, so Birst is calling this Mode 3. 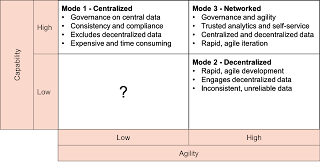 While there are some important technological advances and enablers in the Mode 3 quadrant, I also see it as a move towards Collaborative BI, which is about the collective ability of the organization to design experiments, to generate analytical insight, to interpret results, and to mobilize action and improvement. This means not only sharing the data, but also sharing the insight and the actioning of the insight. Thus we are not only driving data and analytics to the edge of the organization, but also developing the collective intelligence of the organization to use data and analytics in an agile yet joined-up way.

I first mentioned Collaborative BI on my blog during 2005, and discussed it further in my article for the CBDI Journal in October 2005. The concept started to gather momentum a few years later, thanks to Gartner, which predicted the development of collaborative decision-making in 2009, as well as some interesting work by Wayne Eckerson. Also around this time, there were some promising developments by a few BI vendors, including arcplan and TIBCO. But internet searches for the concept are dominated by material between 2009 and 2012, and things seem to have gone quiet recently.

Previous posts in this series