Who's the Dick in the WineBar?

A roaming day on Thursday. After a couple of fairly short meetings at opposite ends of London, I found myself borrowing some office space and broadband in Brick Lane for most of the afternoon. 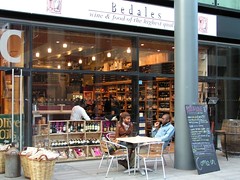 From there it was only a short walk to Bedales WineBar in Spitalfields, where James Governor of Redmonk had organized a Web 2.0 networking event, with folks from Adobe (who kindly paid for the wine), IBM Hursley (aka EightBar) and Microsoft, as well as a number of independents. I had difficulty finding it, so I asked an intelligent-looking woman who just turned out to be Emily the manager, on her way back to the place with an armful of delicious-looking bread.

This meeting was reported by Darren, Derek and Tink, as well as James himself. James is clearly a regular (a previous meeting he organized was reported by Adrian), and Emily looked after us very well.

Too well perhaps. The wine was excellent, and my recollection of the discussions is accordingly vague. I know I talked a bit to Peter Bell about the Wax workshop I attended a couple of weeks ago. I also think I must have been talking about presentation style (see my earlier post on Beyond Bullet Points), because someone (I'm not sure who, but thanks anyway) told me I absolutely had to watch Dick Hardt's video Who's the Dick on My Site? Which I did, and also his earlier Identity 2.0 Keynote presentation. (This was recommended on the Presentation Zen site last October, but I didn't follow it up at the time. See also Some Notes on the Lessig Method by Stephen O'Grady.)

If you are accustomed to traditional PowerPoint, beware. You may find these videos disturbing.

Posted by Richard Veryard at 10:25 pm